Caution: the topic discussed in this post is extremely disturbing. Some of the images below should be viewed by those ages 17+ and are not reccomended for children.

Yet it is children who are subjected to this barbarity.

I mentioned this briefly in a previous post, but I think it’s too important a topic to just brush to the side.

When it comes to men, it’s just accepted, one way or the other. After all:

Not being male, nor having sons, this has never been an issue for me, even as a conversational topic. Some guys were circumcised as infants, some weren’t. Period, end of discussion that never happened*.

Then, when I was in high school, I read an article in Reader’s Digest about a woman named Waris Dirie, a model. I sat on the couch in my grandmother’s living room, absolutely riveted. The pictures that attended the article were beautiful. The content** made me want to vomit. 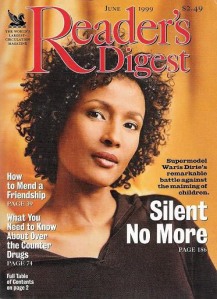 In 29 countries throughout the Middle East in Africa, there live 125 million girls and women who have survived the practice of female circumcision, also called female genital mutilation (FGM). Many others have died from shock, infection, and blood loss. According to the World Health Organization, the procedure has zero health benefits, and is usually carried out on girls between the ages of infancy and fifteen years. FGM can lead to problems including urinary difficulties, infections, cysts, and high newborn mortality. It is recognized internationally as a human rights violation. Practiced in areas far from centers of modern medicine, these are the types of intruments used to carry out the procedure: 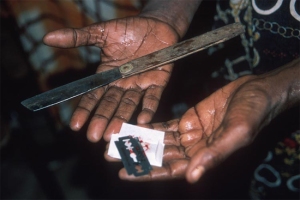 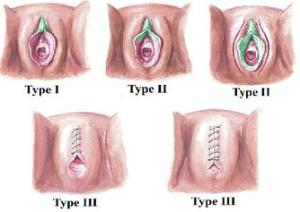 Think about that for a moment, ladies. Think about the last time you’d downed that coffee on the way to work, and how badly you really had to go by the time you go there. Think about the sigh of relief when you sat down and let the floodwaters go.

Now imagine that you could only go one drop -literally- at a time. Imagine the pain.  Imagine the pain you suffer every time you get your period, when each drop of blood, each clot of tissue, must squeeze through that tiny opening. You may never find pleasure in sex – you would have to have surgery before you could have intercourse! Even if you managed to immigrate to a more enlightened country and escape that culture, you still have to go through surgery to reverse the damage. Chances are your clitoris was removed.

Why? Why was this done to you? It in no way helps your body. Nothing was accomplished. Nothing was broken and needed to be fixed. You only drew an unlucky ticket that placed you into a culture that sees women as dangerous creatures whose sexuality is dirty and must be controlled. Your virginity is key, and so sewing your vagina shut is the only way to keep your libido at bay. You are told that you are “clean” and “beautiful” after undergoing this barbaric practice, and what woman doesn’t want to be called beautiful? And so it continues, generation after generation.

Ladies, get your heads on straight. Your employer not paying for your birth control does not constitute a “war on women”. Stop listening to those morons like Nancy Pelosi and Wendy Davis and open your eyes to what a true atrocity really looks like.

*If any male wishes to comment on the subject, please do.

**The text of the Reader’s Digest article can be found here: http://www.fgmnetwork.org/articles/Waris.html
A simple Google search of her name will bring up other FGM links, including her foundation.

9 responses to “The Real War on Women: Female Genital Mutilation”