One of the greatest things about having President Trump in the White House and being newly married is that I have not had any reason to blog…really anything.  However, the Chinese Corona Virus is seeming more and more like yet another anti-Trump plot, and more, an attempt by China to completely subvert American power. I firmly believe that this will all come to light eventually, but in the meantime…

The following was written in extreme frustration, nay, anger,  on Saturday, April 11, 2020:

Tonight is the Great Vigil of Easter, the holiest night of the Christian calendar. The night Christ broke the chains of death and opened the gates of Heaven for us all; a night when churches are packed to the rafters to bear witness to the Light of Christ.
Not tonight though. Tonight, the name of the new god is “social distance”, and so pastors are arrested and congregants are threatened with house-arrest  fines, or jail time. The latter is especially ironic, considering that prisoners are being released from correctional facilities in order to “stem Covid-19 infections”. (Spoiler: Not a great plan.) From St. Peter’s in Rome to your local parish, the doors are locked to the faithful.

Tonight, I realized just why I am so absolutely furious about it all.

Catholics, in the weeks between Easter and Pentecost, will spend a great deal of time hearing about the Apostles in the days and weeks following the Crucifixion. We will hear about how Peter stood up with the Eleven and basically called out the Romans, saying:

“You who are Jews, indeed all of you staying in Jerusalem.
Let this be known to you, and listen to my words.
You who are Israelites, hear these words.
Jesus the Nazarene was a man commended to you by God
with mighty deeds, wonders, and signs,
which God worked through him in your midst, as you yourselves know.
This man, delivered up by the set plan and foreknowledge of God,
you killed, using lawless men to crucify him.
But God raised him up, releasing him from the throes of death,
because it was impossible for him to be held by it.

Not to give anything away, but this sort of declaration of faith did not exactly endear the Apostles to the Roman overlords.

Still, in homilies and in readings, we will be told to have the faith of the Apostles, to go out and preach the Word as they did. When the mission preachers come this summer to beg funds for their missions around the world, we will hear the stories of St. Damien of Molokai, or Gregory the Great, or Sts. Roch, Aloysius Gonzaga, and of course, the Fourteen Holy Helpers. Each will preach with great enthusiasm the love and care these holy men and women provided the sick, the suffering, and the dying.

Yet the doors remain closed. When faced with our own version of the plague, manufactured or not, the clergy from the Pope in Rome all the way down to the local bishop, remain as the apostles -huddled and afraid- in the upper room.

The faithful, called upon more often these days for the contents of their wallets than the strength of their prayers, are cut off from that which we hold most dear. We are barred from Holy Communion. Confession is impossible. Our babies remain unbaptized, our ill and our dying left to die without Last Rites. Marriages are cancelled. The burying of our dead, impossible.

We are so often told to ask ourselves, “What would Jesus do?” I have a hard time believing He would be okay with any of this. I cannot help but feel these actions by the clergy have been a major victory for the evil one.  Where is the faith that the apostles and the saints had? Where is their strength to stand up to civil authority and do what is right, as Peter did, in the very name of the man that the city authorities had so recently, so brutally, put to death?

If the very leaders of the Church cannot practice what they preach, how can they expect us to do so? 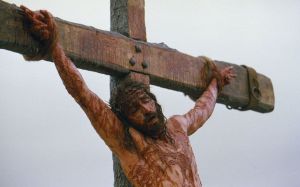