A few weeks ago, a friend who describes himself as being fully in the Bernie encampment made the following statement, and I can’t say it any better than he himself could.

For exhibit A, I present the exact conversation as it took place on social media: Names and faces have been blocked to protect privacy. We shall call my snowflake opponent…The Bumble. 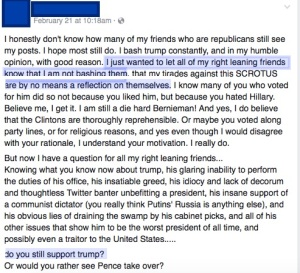 My opponent in Blue, myself in Red. I highlighted the parts of his statement in blue that I thought were critical.

So here I was, watching an adult male (from here known as “The Bumble”)  asking a group of other adults their feelings on the first month of Trump’s administration. Do they feel that he is doing a good job thus far? Are we faring well as a country? What do you like and what don’t you? Is he effective?

In my response, in red, I gave my own, personal answer, and the reasons why I think Trump and his staff are completely able and effective for the rigors of the next four years, despite all the loudmouths in liberal government and the media. As you can see from the screenshots, my differing opinion was quickly shot down with “Your information is wrong on so many levels and points. I’m sorry you feel this way.” I gave him plenty of opportunity to refute with his own opinions and information, but he ignored the opportunity for an open discussion and instead took his toys to another playground, a typical play of snowflakes leftists.

The Bumble had no problem telling me I was wrong, but he could not defend himself against what I said, so he just unfriended me. Now he won’t see my abhorrent opinions encroaching on his newsfeed. He needn’t worry that I might jump out of the bushes wearing a ballgown in red, white, and blue trying to cram a “Make America Great Again” hat on his head.

One of the prime ways to identify a special snowflake: If they can’t get you to agree with them, they will do their best to humiliate you and shut you down. Commonly, this will be accompanied by accusations of racism, misogyny, classism, homophobia, xenophobia, and islamophobia, and, God forbid, being an old, white dude. At least our founding fathers get to be dead white dudes and don’t have to listen to this nonsense.

Vocal conservatives: keep your eyes peeled as to who might be unfriending you throughout the year. Might save you on stamps come Christmas.